Most materials containing pores in them are considered as porous media and porous media widely exist in the world. Basically, a porous medium consists of pore portion and solid matrix or skeletal portion, The porous media in nature are usually filled with liquid or gas. Strictly speaking, most of solid materials in nature are porous media. Fig.1 shows the three main types of porous media, their typical microscopic arrangements and some of the physical models used to describe their mechanisms. 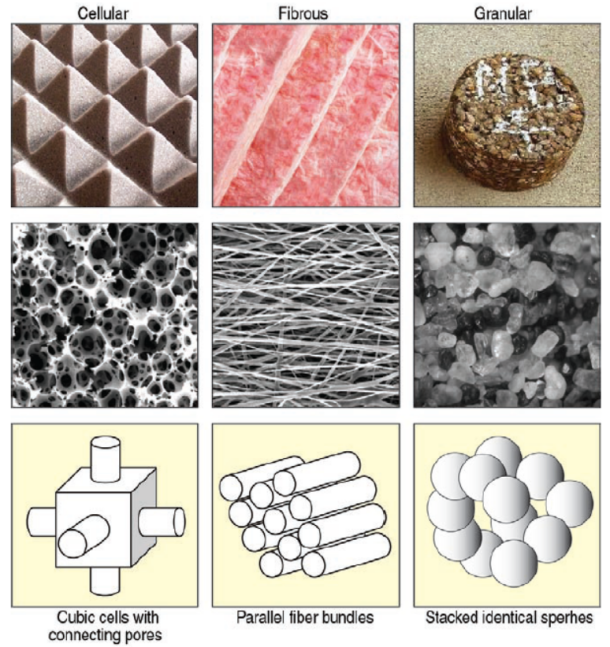 Due to the fact that the real structure of porous media are very complex, it is impossible to give an exact picture about the phenomenon involving the interaction of fluid and solid surface. To overcome this difficulty, one can treat the porous media as a continuum consisting of series of particles, which is very similar to the definition of fluid density. In other words, people can find a representative volume element of porous media that the size of this volume id required to be much lager than that of a single pore, which indicates that a porous medium contains many pores, which are much less than the characteristic length of the whole flow field. The porous media can then be treated as a continuum consisting of series of such elements.

For certain media, if the porosity is irrelevant to the spatial position, the media are called homogenous media. Otherwise, it is called inhomogeneous media.

The word “fractal” was first introduce by a mathematician, Mandelbrot. The parameter for quantitative description of the property of fractal is called fractal dimension. Contrary to the classical Euclid geometry, whose dimension can only be assigned as an integer because it deals with regular geometrical figures, the dimension of fractal structure is a fraction. The fractal theory is applied to potential regulations from the superficial irregularity and has been widely used among many subjects.

The main characteristics of fractal geometry are self-similar and scale invariant which means part of geometrical shape can be exactly or very close to a reduced size copy of the whole. Actually, it has been reported that the microstructure and the distribution of pore size possess the characteristics of fractal. Sierpinski triangle and Menger sponge, as shown in Fig. 2 and Fig. 3, are typical models usually used in mathematical representing the geometries of porous media. 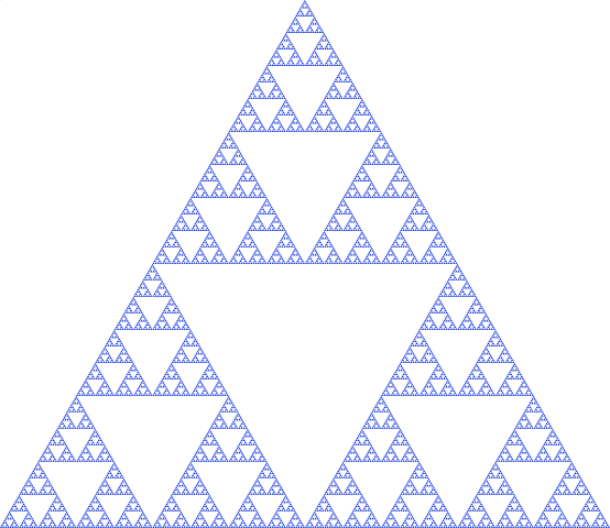 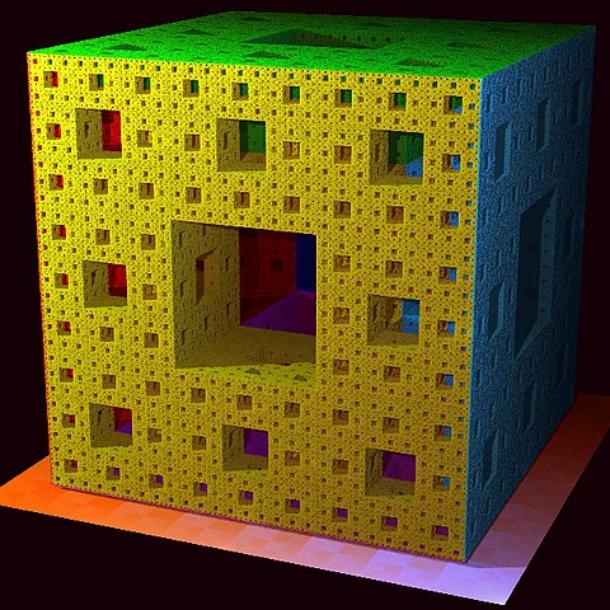 Since the invention of fractal theory, it has been applied to investigate the transportation problem in porous media. The porosity and permeability of porous media may be related to the fractal index.

In investigating wave motions in porous media, the main concern are both the waves regarding the media in which the waves propagate and energy source by which the waves are generated. In fact, the wave motions are affected by a variety of factors such as topologic and material properties of media, characteristics of wave energy sources, medium porosity and permeability, properties of the fluids saturated in the media, as well as combinations of the waves propagation in the domain considered. The behaviors of the wave motions are therefore very complex.

For the media, the wave behavior in a fluid-saturated medium is affected not only by the separate motions of the solid and fluid but also by the relative motion between the solid and fluid. It is generally accepted that the waves attenuate while they propagate in the medium due to the material properties and the presence of the pore fluid in the porous media. In fact, wave velocity and wave attenuation are two key aspects of wave propagation in porous media. These aspects are important in analyzing the dynamic response of the media with respect to the properties of both the media and the wave source, such as viscosity, porosity, and frequency.

Component of the body waves

Biot theory describes the elastic waves propagation in a porous saturated medium. Biot ignores the microscopic level and assumes that continuum mechanics can be applied to measurable macroscopic quantities. He postulates the Lagrangian and use Hamilton principle to derive the equations that govern the wave propagation.

The main assumptions of the theory are:

In engineering applications, the discussion of wave propagations in porous media half-space is often needed. And at a free boundary of half-space, the reflection, refraction and diffraction of the incident wave must be considered. Surely, that would be a difficult subject.

Theoretically, the inhomogeneous wave incident on the boundary of the medium will generate various surface waves.

Component of the surface waves

Boundary conditions of the interface

The phenomena describing the reflection, refraction and diffraction of waves are related to the presence of inhomogeneities and interfaces. Knowledge of the corresponding boundary conditions is essential to correctly describe these phenomena. In fluid/fluid contacts in porous materials, we should expect fluid flow across the interface when a wave passes, and as we have mode conversion from P-wave to S-wave energy in single-phase media, we may expect mode conversion between the three waves propagating in a porous medium. In the developments that follow, the following different cases of the appropriate boundary conditions can be derived:

For further applications, a thorough and systemic study on wave propagations in fluid-saturated porous half-space media in is needed. The progress in such a study will certainly contribute to the comprehensive understanding of the mechanism of the technique and enhance its application. 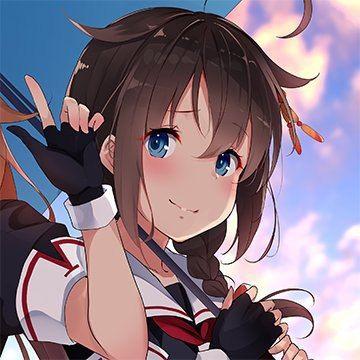